Uncontrollable Chinese Rocket Set To Reenter Earth This Weekend, Has A Tiny Chance Of Crashing In Abuja 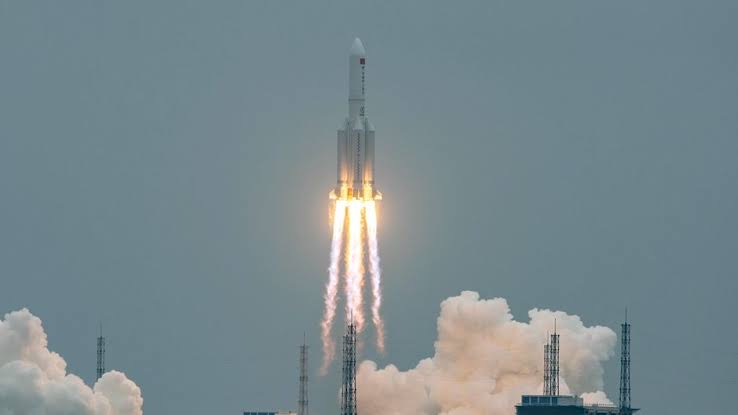 A large Chinese rocket that is out of control is set to reenter Earth’s atmosphere sometime late Saturday or early Sunday, according to experts and officials.

The rocket, which was launched in China in late April, is 10-storey tall and twice as heavy as a school bus, but no one is quite sure where or when.

The rocket launched a piece of the new Chinese space station into orbit on April 29 but then was left to hurtle through space uncontrolled until Earth’s gravity began pulling it back to the ground.

The 100 feet tall Long March 5B rocket, weighing 22 tons, is expected to enter Earth’s atmosphere “around May 8,” according to a statement from Defense Department spokesperson Mike Howard, who said US Space Command is tracking the rocket’s trajectory, CNN reports.

According to NBC, scientists say the risk of it killing anyone after it re-enters the planet’s atmosphere is small but not impossible: There is a tiny chance the debris could hit New York, Los Angeles, Madrid, Rio de Janeiro, the Nigerian capital of Abuja or Beijing. It will more likely land in an ocean or the wilderness.

The section of China’s Long March 5B rocket is tumbling through space in an uncontrolled orbit at 18,000 miles per hour after blasting off last month carrying part of the country’s new space station.

According to Howard, the rocket’s “exact entry point into the Earth’s atmosphere” can’t be pinpointed until within hours of reentry, but 18th Space Control Squadron is providing daily updates on the rocket’s location through the Space Track website.

While it’s common for pieces of rockets to fall back to Earth, this particular section has drawn concern because its lack of control means experts aren’t sure when or where it will come down.

When about the rocket on Friday, Chinese Foreign Ministry spokesman Wang Wenbin said it would burn up on re-entry calling its descent “common international practice.”

The probability of causing harm to aviation activities or activities on the ground are extremely low.

Meanwhile, the Chinese state-run Global Times newspaper said it would likely splash down in the sea.

Reacting, California-based Aerospace Corporation puts the chance of that happening at 75 percent. It says between 60 and 80 percent of the rocket remnant will likely burn up — but the rest will likely hit ground or water.

The risk is low but experts say the re-entry is part of a bigger problem that’s only going to get worse, as countries launch more rockets that could either cause damage by crashing back to Earth — or collide and create a cloud of space debris that could imperil other satellites or astronauts.

Additionally, European Space Agency has predicted a “risk zone” that encompasses “any portion of Earth’s surface between about 41.5N and 41.5S latitude” — which includes virtually all of the Americas south of New York, all of Africa and Australia, parts of Asia south of Japan and Europe’s Spain, Portugal, Italy and Greece.

That enormous range is, in part, a result of the rocket’s blistering speed — even slight changes in circumstance can drastically change its trajectory.

Despite recent efforts to better regulate and mitigate space debris, Earth’s orbit is littered with hundreds of thousands of pieces of uncontrolled junk, most of which are smaller than 10 centimeters — about 4 inches.

Objects are constantly falling out of orbit, though most of them burn up in the Earth’s atmosphere before they have a chance to make an impact on the surface.