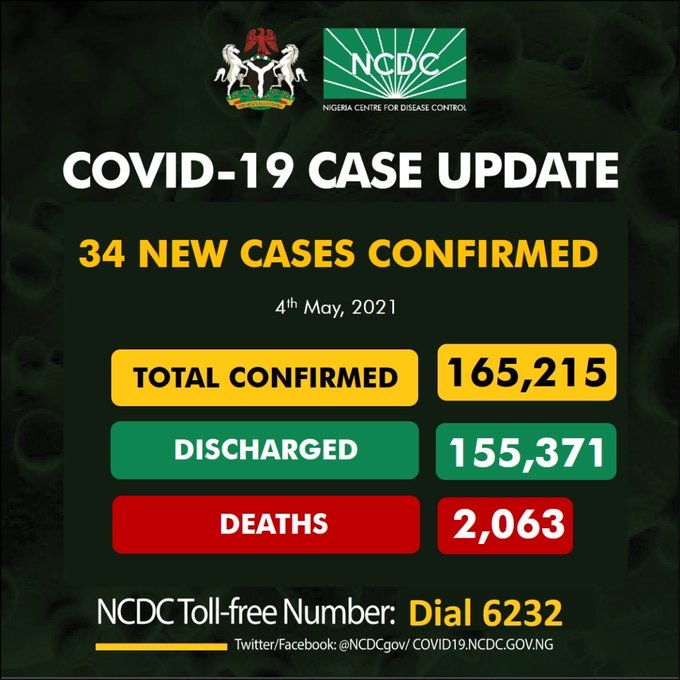 Nigeria Centre for Disease Control (NCDC) says it registered 34 new cases of COVID-19 in three states of the federation and the Federal Capital Territory (FCT).

The centre disclosed this on its official Twitter handle on Tuesday, saying that the 34 new cases were recorded in Enugu (19), Lagos (13), Kaduna (1) and FCT (1).

NCDC noted that the Tuesday report included data from Enugu State recorded between April 28 and May, 3.

It, however, noted that there was no recorded case of recovery from isolation centres across the country as of May 4, saying the total number of recoveries remained 155,371.

According to it, there is also no COVID-19 death in seven days, keeping the death toll at 2,063.

To ensure no imported cases from countries experiencing a surge in COVID-19 cases, Nigeria recently banned travels from Brazil, India and Turkey.

Brazil and India reported about half of the total number of new COVID-19 cases recorded globally last week, according to World Health Organisation.

Federal government said non-Nigerians who had travelled to any of the three countries in the previous 14 days would not be allowed into Nigeria.

While working to prevent imported COVID-19 cases, Nigeria is also continuing with its vaccination programme with over 1.2 million Nigerians receiving their first of two shots of Oxford/AstraZeneca COVID-19 vaccine. Nigeria has, so far, received about 4.4 million doses of the vaccine.

‘I Only Connected Him To Person Selling Native Clothes, Caps’ – DCP Abba Kyari…